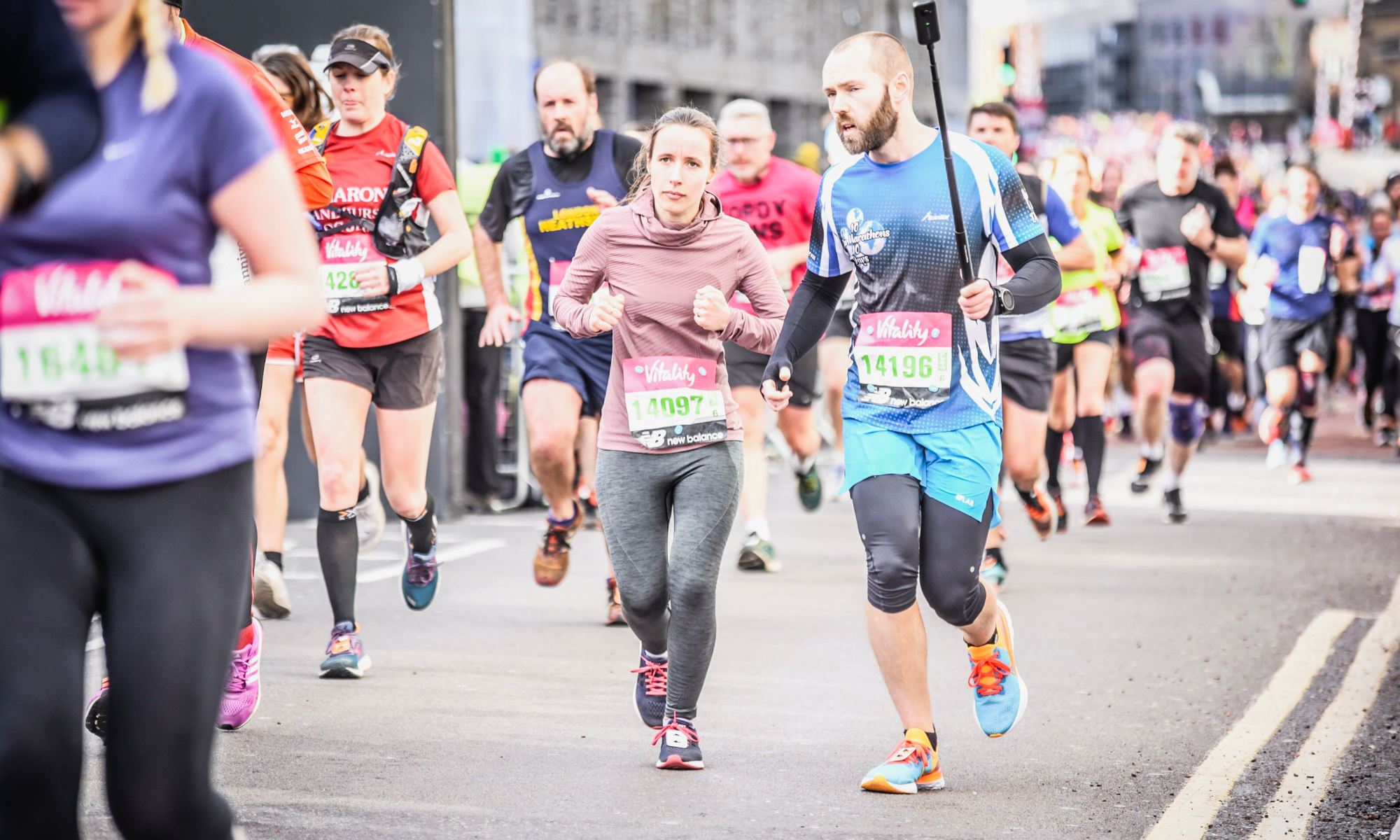 Back in 2018, Naomi ran her first ever half marathon at the Big Half (she’s since run a total of 18, plus three marathons) and I paced her around it. This year’s race was the first day of the month in which we’re getting married, so it only seemed right that I pace her around it again.

The day before the Big Half was the Trionium Leith Hill Half – my race recap of that race is here and the YouTube video here. Hills, mud and wading through water – great fun, go have a look. Recent neglect of hill training meant that my legs were suffering from it though and with less than 24 hours to rest them up, I was looking forward to the flat of the Big Half.

I also decided to film the Big Half. My arms had just about recovered from holding a selfie-stick around the previous day’s race, so I thought it only right that I knacker them out again. The video of the Big Half is below – please do click through and hit subscribe on the YouTube channel for future updates – it really helps me!

Unlike the previous day’s race, the Big Half started at a normal time – 9.15 for our wave, with an 8.30am closure for the baggage drop. Which meant getting an early train and no lie in. Just as well, as the train was already rammed. We jumped off at London Bridge and made our way across Tower Bridge to our wave’s start point at Tower Hill.

The previous day had been a mix of torrential rain and sun. Today was clear and crisp, freezing in the shade and warm in the sun but most importantly dry.

Having dropped off our bags, including our warm layers, we sought out any space where the few rays of sunshine were landing in order to try and stay warm. After about 20 minutes we decided it would be easier to just go and wait in our start pen around the corner.

Walking around the corner, we discovered that the entire start pen was in the sun and had been wasting our time getting cold elsewhere. No matter. The start pen rapidly filled up. By coincidence we found ourselves beside my line manager who was also running – fairly unlikely given the 17,000 entrants. We chatted for the next 30 minutes as we waited for the start, getting colder by the minute.

Eventually the first waves started moving and we walked forward into the next pen. The time ticked down and the horn finally went. We were off.

The first stretch of the course runs along from Tower Hill, through Shadwell and the Limehouse Link Tunnel, before doing a complete loop of Canary Wharf and heading back in the opposite direction towards Tower Bridge.

The initial couple of kms were a good opportunity to start getting some warmth back into our legs and we set a decent pace while weaving through the crowds which are ever present at the start of a big race.

A couple of kms in and the course heads through the Limehouse Link Tunnel, starting with a long decline which provides a good opportunity to stretch out the legs a bit before flatting off. It’s always rather strange running through the tunnel, usually ram packed with cars, as the sound of thousands of feet hitting tarmac echoes and reverberates around.

The tunnel is also longer than I ever remember, stretching for 1.9km, which means that 9% of the course is actually underground. Eventually the incline starts back up to the surface and around 5km in everyone emerges onto the Isle of Dogs.

Support is fairly scarce for the next km as the course loops around to Billingsgate Market, as you’re essentially running on part of a dual-carriage way. Just as we reached Billingsgate Market, a steel drum band struck up, providing a good boost. Then over the small bridge and into Canary Wharf proper.

The small loop around Canary Wharf is the first and I think only time where runners go up and down the same bit of road, separated only by a barrier, so everyone is able to cheer on the runners heading in the other direction. The support around Canary Wharf was great, with large numbers coming out to line the street.

Five minutes later and we were heading back West along the river, for the 5km run to Tower Bridge where we would cross.

And Back to Tower Bridge

The route back to Tower Bridge was fairly uneventful, first through Shadwell and then through Wapping, transitioning from smooth tarmac to cobbles and back again.

Wapping High Street is always a particular boost on the way back. Crowds come out again and live music along parts of the route is always welcome.

Before we knew it, we were back at Tower Hill and turned the corner on to Tower Bridge. Naomi and I decided to drop back off the pace slightly in order to enjoy the event a bit more, so eased off a bit as we made our way across Tower Bridge, with brilliant views across the Thames.

The crowds were out as expected as we crossed over to South of the river and then turned left (East) through Southwark. This was more familiar running territory for Naomi as it’s a long stretch of road which forms a more frequent part of our weekend long runs.

The route here basically consists of three long roads that stretch for the next 5km before curving to follow the course of the river.

Then back out onto the main roads, turning East again and over to Deptford and then Greenwich.

Naomi was lagging slightly but going strong. With a km to go the signs start to get more frequent, counting down every 100 metres to go. The crows here were brilliant, cheering on everyone and mentally pushing everyone along.

Into the very familiar Greenwich Village itself and around the final corner, with the finish line just ahead and in front of the Cutty Sark. Seeing the finish line gave Naomi the impetus to put on a final sprint and we were across the line.

Walking around and out of the finish area, we collected our medals and headed over to Greenwich Park to collect our drop bags. This was where the Big Half let itself down. It took over an hour for us to get the 300 metres from the finish to the bag drop and collect our bags.

The volunteers were doing their best to get bags back to their owners but the entire system had broken down. 45 minutes standing in front of the bag lorry holding race numbers up in the air, in the hope that a volunteer would see it and manage to find a bag within the chaos, while getting colder and colder.

Eventually and after spending half as much time trying to get our bags as we had spent running, we managed to get them and walk back home through Greenwich Park.

I have six days race free (but with plenty of training) before my next marathon on Saturday – the Phoenix Spring Marathon. It’s technically trail, albeit flat along the Thames tow-path but with gravel and the occasional mud. I haven’t decided yet whether I’m going to use it as training (in which case I may film it), or go full out and see where my legs are at. Either way, I’ll have a race recap up here next week.

After that, there’s one 10k race in the calendar which I may PB hunt at, before I’m off for the wedding and honeymoon (which I will be running on, but not racing – there aren’t any races on St. Lucia. I know. I’ve looked).